The NRA endorsed Lt. Gov. Tate Reeves for re-election last week, giving him an A+ rating and saying the State Senate has taken “critically important steps” to protect the Second Amendment under Reeves’ leadership.

Reeves is being challenged by conservative Alisha McElhenney in the Republican primary for Lt. Governor, which takes place on August 4th. McElhenney is a newcomer to politics and is considered a long shot candidate in the primary.

Reeves’ record on gun issues has generally been decent, although he has occasionally been accused of letting pro-gun bills languish in the Senate to settle political scores. He supported two pro gun bills earlier year, and recently backed Gov. Bryant’s executive order to allow national guardsmen to carry at certain recruiting centers.

On non-gun issues, Reeves has been a frequent target of conservatives and Tea Party groups. Earlier this year, he proposed a study group to scrutinize Common Core standards that the Brookhaven Tea Party called a “waste of tax dollars” that would “enrich Haley Barbour’s friends.”

He has also clashed frequently with Chris McDaniel, who openly backed Reeves’ opponent Billy Hewes III in 2011. McDaniel has frequently accused Reeves of preventing bills he supported from moving forward.

Posted by Rebel Mississippi at 7:47 AM No comments:

Is Ted Nugent Switching To Gun Owners Of America?

Ted Nugent, possibly the NRA’s most famous board member, appeared in a publicity photo for rival gun group Gun Owners of America last week. Does this mean Nugent might be switching to a new team?

GOA tweeted a photo of Nugent along with a quote of him saying: “Be a real American warrior for gun rights and freedom. Join GOA & sign up as many members as you can.” 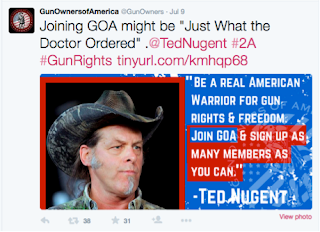 Although Nugent doesn’t seem to have said anything publicly about switching over to GOA, the organization certainly reflects his strong views on gun rights.

In 2013, the NY Times said GOA “pushes harder than the NRA” in its defense of the Second Amendment, and credited GOA with convincing Republican lawmakers like Tom Coburn to back off gun control legislation that year.

The newspaper also pointed out that GOA spends almost as much on lobbying as the NRA despite being less than 1% of its size:

While it might be increasingly potent, the group is not rich. Gun Owners of America’s total revenue in 2011 was less than $2 million, compared with the N.R.A.’s nearly $220 million. The group spent $1.3 million last year to lobby Congress, while the N.R.A. spent nearly $3 million. Its campaign contributions last year were $119,850, placing it at 2,669 on a list of 20,968 lobbying groups ranked by the Center for Responsive Politics. The N.R.A. spent $1.5 million, putting it at 230th. Gun Owners of America has 300,000 dues-paying members; the N.R.A. has five million.

Posted by Rebel Mississippi at 12:03 PM No comments:

A prominent San Francisco-area Democrat, Yee was known for his support for gun control and had an “A+” rating from the Brady Campaign. He was arrested last year after being caught up in an eight-year investigation of a Chinese-American mafia association.

Last week, Yee admitted that he discussed helping an undercover FBI agent buy automatic weapons from the Philippines. News reports have said the guns were intended to be brought to the US for distribution.

In 2012, Yee said, “no one will convince me it’s anything other than a joke to say having multiple clips and semi-automatic weapons that can shoot 100 or more bullets at a time is necessary in this state or in this country, it’s ridiculous.”

Yee previously pleaded not guilty to all the charges, but changed his plea last week. According to news reports, he now faces a maximum of 20 years in prison and a $250,000 fine.